Former Vice President Joe Biden’s virtual campaign on Monday was a round table with Jane Hartley, the former U.S. ambassador to France and the chairman of Sesame Workshop and Blair Effron, Founder and Partner of Centerview Partners among others. Jasmine Razeghi reports on the news of the day.

Former Vice President Joe Biden’s virtual campaign on Monday was a round table with Jane Hartley, the former U.S. ambassador to France and the chairman of Sesame Workshop and Blair Effron, Founder and Partner of Centerview Partners among others.

“We’ve never appreciated, like we do today, how consequential one person can be In charting our history,” Effron said. He claimed that the majority of the country ”wants leadership based on American ideals: decency and compassion.”

After Biden made his opening remarks, he relayed hope to America while emphasizing the importance of voting. “It’s go time. This is the most important election of our lifetimes. I may have said this to you before, I think the character of the country is literally on the ballot,” Biden stated.

Here’s What a President Biden Would Do

Biden noted the astounding 125,000 COVID-19 death toll while slamming Trump for failing to protect the United States, “not just now but throughout his presidency.” Vincent Mai, the founder and chairman of Cranemere, asked about the nation’s economic situation and how Mr. Biden would balance the short-term requirements to address the crisis with the long-term investments that the nation needs to make - and how we would pay for it.

The presumptive Democratic Presidential Nominee noted the need for relief and recovery, intertwined, in order to heal the country. He criticized the President in the way he has made America choose between public health and the economy. Biden urged that the solution is to focus on both. Former Vice President Biden called for reliable testing, increased PPE for workers, and assisting small businesses in their reopening process.

Susan Rockefeller, a documentary filmmaker and philanthropist, asked Biden about the recent report that Russia had secretly offered to pay bounties to Afghan militants to kill U.S. service members and how he would approach Russia if elected president.

Joe Biden recognized that the facts are still not clear but that it would be outrageous if Trump did know and refused to act. He would call it a “betrayal of a sacred duty to protect troops that he sends into harm’s way.” Biden said he didn’t think about the issue “as a candidate for president,” but as a father whose son served in harms’ way. 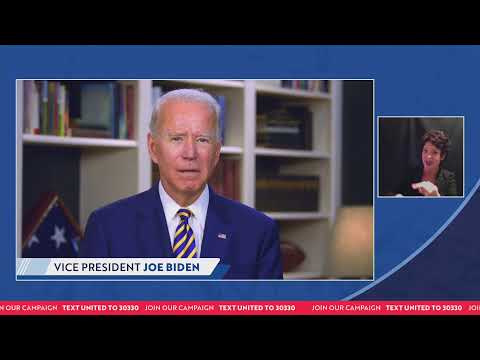